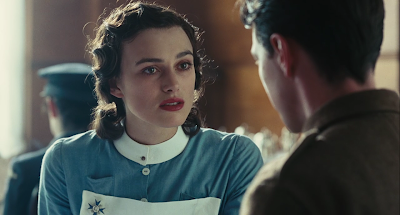 Leonard says in his review: "Handsome but portentous adaption of Ian Mcewan's novel never delivers the emotional impact it should, given its intriguing premise."

A beautifully filmed period piece set in 1935 England. A young rich woman, Cecilia, falls in love with a young man, Robbie, who works on her estate. Her younger sister, Brionym is also in love with Robbie. When Briony sees something she doesn't quite understands she tells a tale that ruins the lives of those around her.

The movie works as a drama, a romance, a tragedy and a mystery. The movie doesn't explain why everything happens like it did, but leaves it up to the viewer to decide. After the mystery is revealed the movie turns to tragedy as we begin to empathize with the fates of Robbie and Cecilia.