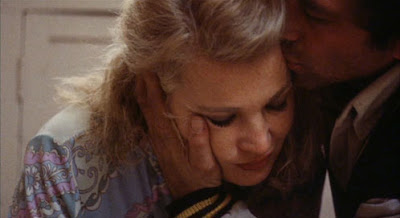 Leonard says in his review: "Typicallly overlong, overindulgent Cassevettes film, vaguely delineating relationship of woman who's cracking up and her hardhat husband who can't handle it."

Roger Ebert says in his Great Movie review: "Cassavetes (1929-89) is the most important of the American independent filmmakers. His "Shadows" (1959), shot in 16-mm. on a low budget and involving plausible people in unforced situations, arrived at the same time as the French New Wave and offered a similar freedom in America: not the formality of studio productions, but the spontaneity of life happening right now." He goes on to say:"A Woman Under the Influence (1974) is perhaps the greatest of Cassavetes' films." Gena Rowlands was nominated for an Oscar for Best Actress in a Leading Role and John Cassavetes was nominated for Best Director. Tim Dirks has Gena Rowlands performance in this movie listed as one of his 100 Greatest Movie Performances of All Time.

Something is wrong here. IMDB has it at 8.0, RT at 94% and Roger Ebert says it is perhaps the best film from the most important independent film maker in America. Leonard says it is overlong and overindulgent.

Cassavettes tried to strip away as much as he could of Hollywood from his films. He tried to take snapshots of life, rather than trying to catch you up in the story. He shot in a documentary style that was reminiscent of the Italian neo-realists. he wasn't concerned with happy endings, he wanted to show the truth.

Mabel (Gena Rowlands) is a very fragile, troubled character but her husband Nick (Peter Falk) insists she is not crazy. When Nick can't make it home from work one night Mabel gets drunk and picks up a guy at a bar. The next morning mabel thinks the guy is her husband Nick. She is clearly insane.

When Nick comes home with his fellow workers the next day we can see that he is apprehensive about how his wife might act, but it is also very obvious that he loves her deeply.

The movie continues to explore the relationship between Nick and Mabel, with Nick hoping desperately that Mabel will get better and Mabel trying desperately to act normal. Nick does his best but when Mabel's behavior begins to affect the children he is forced to have her committed. As the movie goes on we see that Nick is almost as crazy as his wife, although his behavior is often triggered by Mabel's bizarre behavior.

When Mabel is sent away, Nick tries to take care of the kids, but after a trip to the beach he lets the kids drink beer on the way back. He's pretty clueless as a father.

Six months later Mabel comes home and Nick throws a big party. Mabel hasn't made any progress and the movie gets even more uncomfortable. Everyone is in pain: Nick, Mabel and the kids. It isn't Ozzie and Harriet.

Although A Women Under the Influence is a disturbing movie, it is fascinating to watch. People who love movies will love the acting in this film. For my money Gena Rowlands' performance as Mabel is the best female acting performance of all time. I also think the movie may be the best movie ever made about mental illness.

While it is not for all tastes, it is clearly ridiculous to give this great move 2 stars.