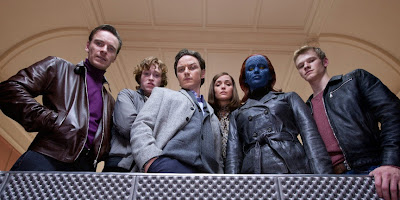 Rotten Tomato Consensus: "With a strong script, stylish direction, and powerful performances from its well-rounded cast, X-Men: First Class is a welcome return to form for the franchise."

Leonard says in his online review: "X-Men: First Class is nothing if not ambitious, attempting to weave its fantastic, comic-book characters into the realm of real life, opening in Poland during World War Two and winding up in the midst of the Cuban Missile Crisis of 1962. I’m not entirely comfortable with the melding of these two worlds. Director Matthew Vaughn gets the most out of the material he has to work with, but there is something genuinely odd about the integration of historical crises and the fanciful nature of our mutant heroes—and a larger-than-life villain.
My taste runs towards a “less is more” philosophy, which obviously isn’t in line with the way Marvel makes movies. X-Men: First Class weighs in at two hours and twelve minutes, and I can’t help but feel it would have been better had the script been pruned and more tightly focused. But I don’t think fans are going to object, because the movie’s strengths—unusual characters, eye-opening visual effects, and commanding lead actors—ultimately outweigh its faults."

The movie explores X-Men origins as we see Charles and Erik as young men as they come to terms with their power. Erik is driven by a sense of revenge as he searches for the mutant who killed his mother. Charles is a professor at Oxford who is doing research on mutations. Charles lives with Raven (Mystique), who is his best friend.

The villain in the movie is Sebastian Shaw (Kevin Bacon), who is a the mutant who possesses the ability to absorb energy and transform it. He is the mutant who killed Erik's mother at a Nazi camp years earlier. Erik and Charles first meet when they are both attempting to capture or kill Sebastian. After their failed attempt Charles brings Erik back to the covert CIA research base.

At the institute Charles, Erik search for other mutants, some of whom choose to join in with them (but Wolverine doesn't). Mystique, Darwin, Beast, Banshee, Angel and Havok are soon on board. Meanwhile Sebastian is gathering his own team of mutants.

Sebastian visits the research institute to recruit the mutants for his team. he tells them that should rule, not be enslaved. He tells them they are either with him or against him. Angel decides to join his team and Darwin is killed by Sebastian. Charles begins to help his team to learn how to use their powers.

Sebastian and his team join are backing the Russians who are trying to put nuclear warheads in Cuba. President Kennedy puts up blockade. Sebastian is hoping for a world war. The new X-Men team sets off to prevent the war. After Erik kills Sebastian, and gets his revenge, he now turns his anger on the humans, who are looking now to destroy the mutants. Charles is injured and Charles and Erik, with their different outlook on the human problem, go their separate ways.

What is most impressive for a comic book movie adaption is the acting. James McAvoy, Michael Fassbender and Jennifer Lawrence are all really good actors. For me the movie works because the actors take their roles seriously. I think this origin movie is valuable because it makes the other X-Men movies better. By filling in the background details the other movies become even more enjoyable as we understand them better.

If Leonard had given this a three star rating I would have been OK with it, but there is no way this very entertaining, well done movie is 2 1/2 stars. It's not easy to write an origin movie about iconic comic book figures but this movie did it very well.