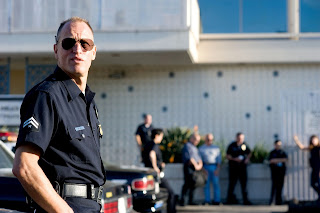 Leonard says in his online review:

I was appalled, in particular, at the awkwardness of Moverman’s direction, repeatedly choosing flamboyant camera moves that distract us from the content of intimate dramatic scenes. It shows no respect for the material.

I hope Harrelson, Foster, and Moverman turn their attention to projects that are worthy of their time and talent. Rampart left me with nothing except regret that I’d invested the time to watch it.

Mr. Maltin's job is to tell the readers of his book whether they will like the movie, and I think his rating does a good job of that. But as a movie critic, he also has an obligation to tell the truth about a movie's quality. I agree that there were a few camera moves that distracted from the movie, but I think the overall quality of the movie is very good.

As I was watching the movie I was fascinated by the character that Woody Harrelson played. What drove him? What was inside of him? He was an enigma. A veteran, who served in Viet Nam, he was probably damaged there. He then got on the force and got caught up in the corruption that surrounded him. When we first see him there is nothing left inside. His daughter says to him: "You're a classic racist, a bigot, a sexist, a womanizer, a chauvinist, a misanthrope, homophobic clearly, or maybe you don't like yourself."

In his four star review Roger Ebert says: "Why is he this way? That question helps explain why the movie is so absorbing, because there is no answer. Rampart lacks the usual plot engines behind crime films, in which motivation comes from money, lust or revenge. Brown behaves in this film primarily just to do bad things."

Woody Harrelson's character wants to be a good father. he wants to keep his families together. He just can't do it. He is a broken machine, and he knows it. In the last scene he stands outside his family's' window and looks in and then he turns around and walks away. Like Ethan Edwards in The Searchers, he knows he can never enter that door again. Rampart, set in 1999, takes place about one hundred and thirty years after the events in The Searchers, but racism is still a part of the American scene.

In his review Leonard said: "James Ellroy and director Moverman, who cowrote the screenplay, paint a bleak picture of their hero that only gets bleaker as the movie goes on and give us nothing to take away when its over." I disagree with Leonard. The movie tells us that sometimes there is no explaining evil - it just is. It is more comforting to be able to explain why horrible things sometimes happen, but sometimes we can't.

Not a movie for all tastes, but a movie that I thought was very well done. I think that this is one of those movies that will be looked at in a much better light in the future.