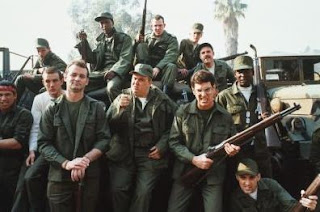 Rotten Tomato Info: "Bill Murray decides to be all that he can be -- and it ain't pretty -- in this hit comedy. John Winger (Murray) is a quick-witted but unambitious loser who comes home after getting fired to discover that his car has been repossessed and his girlfriend is leaving him. With no idea of what to do next, John and his best friend Russell Ziskey (Harold Ramis) impulsively join the Army, more as a practical joke than a career goal. John and Russell find themselves in basic training under the hard-nosed and impatient Sgt. Hulka (Warren Oates), who is stuck with an outfit of goofballs, including overweight Ox (John Candy), naive Cruiser (John Deihl), perpetually stoned Elmo (Judge Reinhold), and the appropriately-nicknamed Psycho (Conrad Dunn). The platoon succeeds in impressing the generals spite of themselves, and John and Russell even find time to romance two pretty female MPs, Stella (P.J. Soles) and Louise (Sean Young). However, when John and Russell commandeer a high-tech military vehicle for a European weekend getaway with the girls, they happen into Soviet territory and stumble into an international incident. Remarkably, Stripes was made with the full cooperation of the U.S. Army, despite its less-than-rosy view of the all-volunteer armed forces"

Leonard says in his review : "Sometimes funny, but eminently forgettable."

I had to say that a few times to myself just to think about what Leonard said in his review. Did we see the same movie? Is this a movie that you can forget easily? I think not.

I'm going to list some of the quotes from this very funny, well written comedy. I think they tell the story better than I can.

John Winger: You can't go! All the plants are gonna die!

John Winger: My philosophy: a hundred-dollar shine on a three-dollar pair of shoes.

John Winger: Cut it out! Cut it out! Cut it out! The hell's the matter with you? Stupid! We're all very different people. We're not Watusi. We're not Spartans. We're Americans, with a capital 'A', huh? You know what that means? Do ya? That means that our forefathers were kicked out of every decent country in the world. We are the wretched refuse. We're the underdog. We're mutts! Here's proof: his nose is cold! But there's no animal that's more faithful, that's more loyal, more loveable than the mutt. Who saw "Old Yeller?" Who cried when Old Yeller got shot at the end?

Russell Ziskey: I've always been kind of a pacifist. When I was a kid, my father told me, "Never hit anyone in anger, unless you're absolutely sure you can get away with it." I don't know what kind of soldier I'm gonna make, but I want you guys to know that if we ever get into really heavy combat... I'll be right behind you guys. Every step of the way.

John Winger: I know that I'm speaking for the entire platoon when I say this run should be postponed until this platoon is better rested.

Sergeant Hulka: You don't say "sir" to me, I'm a sergeant, I work for a living.

John Winger: Why'd the chicken cross the road?
Soldiers: To get from the left to the right
John Winger: He stepped out of rank, got hit by a tank
Soldiers: He ain't no chicken no more

Recruiter: Have you ever been convicted of a felony or a misdemeanor? That's robbery, rape, car theft, that sort of thing.
John Winger: Convicted? No.
Russell Ziskey: Never convicted.

The movie is not only a triumph for its stars (Bill Murray and Harold Ramis) and its director (Ivan Reitman), but a sort of vindication. To explain: Reitman directed, and Murray starred in, the enormously successful “Meatballs,” which was an entertaining enough comedy but awfully ragged. No wonder. It was shot on a shoestring with Canadian tax-shelter money. What Murray and Reitman prove this time is that, given a decent budget, they can do superior work--certainly superior to “Meatballs,” for starters. For Harold Ramis, who plays Murray's grave-eyed, flat-voiced, terminally detached partner in “Stripes,” this is a chance, at last, to come out from behind the camera. Ramis and Murray are both former Second City actors, but in Hollywood, Ramis has been typecast as a writer (“Animal House,” “Meatballs,” “Caddyshack”), maybe because he sometimes looks too goofy for Hollywood's unimaginative tastes.
In “Stripes,” Murray and Ramis make a wonderful team. Their big strength is restraint. Given the tendency of movies like this to degenerate into undisciplined slapstick, they wisely choose to play their characters as understated, laid-back anarchists. Murray enlists in the Army in a what-the-hell mood after his girlfriend throws him out, and Ramis enlists because one stupid gesture deserves another. They're older than the usual Army recruit, less easily impressed with gung-ho propaganda, and quietly amazed at their drill instructor, Sergeant Hulka, who is played by Warren Oates with tough-as-nails insanity.
The movie has especially good writing in several scenes. My favorite comes near the beginning, during a session when recruits in the new platoon get to know one another. One obviously psycho draftee, who looks like Robert De Niro, quietly announces that if his fellow soldiers touch him, touch his stuff, or interfere in any way with his person or his privacy, he will quite simply be forced to kill them. Sergeant Hulka replies: "Lighten up!" The movie's plot follows basic training, more or less, during its first hour. Then a romance enters. Murray and Ramis meet a couple of cute young military policewomen (P.J. Soles and Sean Young), and they happily violate every rule in the book. One funny scene: Murray and Soles sneak into the kitchen of the base commander's house and do unprecedented things with kitchen utensils.

Not politically correct, but it has Bill Murray, Harold Ramis, Warren Oates, Sean Young, John Candy and John Larroquette all having a good time mugging it up before the camera.

Movies that border on slapstick are usually not my cup of tea, but I this is a movie I really enjoyed.