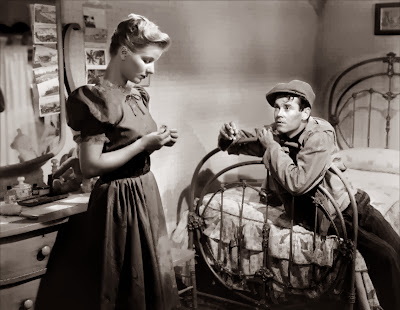 Leonard says in his review : "Plodding and sullen; a long night indeed."

I'm a big fan of the 1939 Jean Gabin film Le jour se lève. Directed by the great Marcel Carné, it clearly shows how the roots of American film noir were based on work of the pre-war studios of France. The sense of impending doom because of the situation in Europe may well have been a big influence on post-war American noir.

We are lucky to have these two movies to look at as we examine the French influence on American film Noir. The Long Night. In 1947 RKO Radio Pictures acquired the distribution rights to the French film and sought to buy up and destroy every copy of the film that they could find. Lucky for us they missed a few.

The French film is wonderful and Jean Gabin gives a great performance as he waits in his room for daybreak to come, and with it his doom. But the American film is far from being "plodding and sullen." Henry Fonda takes on the Gabin part of Fancois, who is now known as Joe Adams. Barbara Bel Geddes, in her first film role, plays Joe's love interest.

Joe, a war veteran and factory worker, met Jo Ann (Bel Geddes) and they soon fall in love. Joe, thinking out load, says "Yet right here in my own home town. I don't know what happened. Every minute with her went like nothing at all. Every minute without her was a long time." As the night goes on the movie flashes back between the present and the past.

The police fire through the door and the door begin to open, but Joe pushes a large bureau in front of it. the door to the dresser opens and we see Joe's sergeant's uniform and pictures of his girl. Joe dodges the bullets and grabs the pictures of his girl and thinks out loud, "Candid camera, six for a dollar. candis means straight and honest, and all the time I wanted so much to believe. cause somehow a guy has to believe in something. I wanted you to tell me about yourself." The movie the fades to the past. So many good noir moments. "Plodding and sullen"? I think not.

When magician Maximilian the Great (Vincent Price) tells Joe that his only interest in Jo Ann is because she is his "long lost child." He tells Joe he is not good enough for his daughter. Jo Ann then tells Joe that he is not her father. Jo Ann explains how she met Maximilian and became friends. Later when Joe talks to the creepy Maximilian, Maximilian pushes Joe's buttons and implies things about his relationship with Jo Ann. Joe shoots him to shut him up.

Joe ends up in the room all alone wondering how this all happened to him. Perfect noir.

Unfortunately the movie goes Hollywood at the end, and Jo Ann talks Joe out of the apartment. Not as good as the original, but still a very good movie.