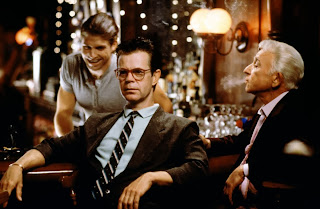 Rotten Tomato Info: "An intriguing and entertaining study in characters going through varying levels of crisis and introspection. This psychological drama leads you in several different directions, weaving and intersecting various subplots and characters, from a brilliant Tom Cruise, as a self-proclaimed pied-piper, to a child forced to go on a TV game show and the pressures he faces from a ruthless father."

Leonard says in his review : "A mosaic of misery, with an array of characters-ranging from a dying man and his angelic male nurse to a precocious kid pressured to perform on a TV game show-who must deal with anger, guilt, isolation, the sins of the fathers, and ultimately, forgiveness, on an almost Biblical level. Fine performances in this emotionally exhausting film, including a dynamic Cruise as a self-invented Pied Piper of satyrdom. Overall impact is muted by the film's sheer length."

Julianne Moore, William H. Macy, John C. Reilly, Tom Cruise, Philip Baker Hall, Philip Seymour Hoffman, Jason Robards... Can you consider a movie great just because of the cast and the great performances they turned in? I think so. Even if there wasn't any plot I still would consider this a great film, just for the performances alone.

But there is a plot in Magnolia as different characters search for the love and life and power and wealth. In his Great Movie review of Magnolia Roger Ebert said: "Magnolia is one of those rare films that works in two entirely different ways. In one sense, it tells absorbing stories, filled with detail, told with precision and not a little humor. On another sense, it is a parable. The message of the parable, as with all good parables, is expressed not in words but in emotions. After we have felt the pain of these people, and felt the love of the policeman and the nurse, we have been taught something intangible, but necessary to know."

In his original 4 Star review Roger said: "Magnolia is the kind of film I instinctively respond to. Leave logic at the door. Do not expect subdued taste and restraint, but instead a kind of operatic ecstasy. At three hours it is even operatic in length, as its themes unfold, its characters strive against the dying of the light, and the great wheel of chance rolls on toward them."

I've seen Magnolia three or four times and I look forward to future viewings. Like all great movies, I know I will it will get better with each viewing.

Magnolia is one of those rare movies that when you see it, you recognize it's greatness, even though you don't totally comprehend it and then you look forward to your next viewing of it.