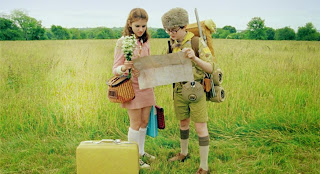 Leonard says in his review : "I really wanted to like this film. I respect Wes Anderson and his distinctive voice as a writer-director (Rushmore is one of my favorite films of the 1990s), but this latest endeavor is so precious and self-aware that it nearly smothers itself. Leonard also said "The central idea by Anderson and his writing partner Roman Coppola has promise, but Moonrise Kingdom is self-consciously clever to a fault. The sheer amount of detail—in the costuming, production design, choice of music (a lot of Benjamin Britten) and camera moves—is overwhelming." Leonard went on to say: "I can’t ignore, or disparage, the sheer originality of Moonrise Kingdom, from its peculiar characters to their peculiar homes. But I wish I felt something more."
(See Leonard's Full Review here)

I have to admit that I have no idea what Leonard is talking about. Maybe he is too smart for me. He thinks the movie is original and clever, but too self-aware and self-consciously clever.

Wes Anderson's movies have been becoming quirkier and more eccentric as he has gone along. Rushmore was a some-what traditional comedy but as he has gone on he has driven to the edge of screwball comedies, and maybe he has gone over the cliff. He presents a dramatic story, but he wraps it in an outrageous package, but for me it all really works.

Then we meet Sam and Suzy and they are two of the most quirky people you could ever meet, but they too take themselves so seriously. They don't think that they are strange, but look on themselves as being extraordinary. When the young lovers run away, some of those left behind are not so sure they want them back. When they finally find them Suzy returns to their family, but Sam is to be put in to an orphanage. But things will work out for Suzy and Sam.

Great cast, great music, great look in a really entertaining film. This was obviously a movie that Leonard was wrong on. Critics loved it, the people at IMDB love it, everyone loves it. On Rottentomatoes 46 of the 47 Top Critics gave it Fresh Reviews. It is a disservice to buyers of his books for him to have such a low rating for such a fine film.