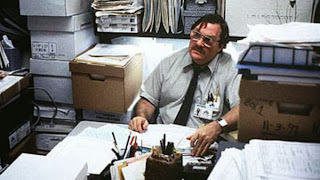 Leonard says in his review : "Fitfully funny satire of office life in modern-day corporate America... Dry and undernourished, though there are some laughs along the way. Nevertheless the film has acquired a huge following in the years since its original release"


Peter Gibbons: So I was sitting in my cubicle today, and I realized, ever since I started working, every single day of my life has been worse than the day before it. So that means that every single day that you see me, that's on the worst day of my life.
Dr. Swanson: What about today? Is today the worst day of your life?
Peter Gibbons: Yeah.
Dr. Swanson: Wow, that's messed up.

I have to admit, I don't get Leonard's rating here. Fitfully funny and acquired a huge following and yet he only gives it two stars. I also don't know what dry and undernourished means. Does he think the movie is a plant?

The movie starts our with Peter stuck in traffic and miserable. He works as a computer programmer in Houston with his friends Samir and Michael Bolton. He comes in on Monday and his boss Bill gives him a hard time about not putting a cover sheet on a report. Milton, who is a little strange, won't turn down his radio. Then another manager comes over and reminds Peter about the cover sheets. He then gets a phone call about it.

Peter likes the girl Joanna (Jennifer Anistan) at the place they get coffee but he has a girlfriend who he thinks may be cheating on him. A consultant, Bob Slydell, comes in and he is an efficiency expert. Bill asks Peter to come in to work on Saturday and Sunday.

Peter tells the occupational therapist that every day is worse than the one before it, and today is the worse day of his life. The therapist hypnotizes him and has him relax. He tells him his worries and carries will be gone. The therapist then drops dead before he can bring him out of it.

Peter is like a new man. He sleeps in, and doesn't answer the phone when his boss calls. He then hangs up on his annoying girlfriend who then breaks up with him. Peter goes to his coffee place and asks Joanna out.

The efficiency expert comes in and starts interviewing the guys. It doesn't go to well for most of them. Peter decides not to go to work anymore, and he wants to bring Joanna home to watch kung fu. Peter goes for his interview and he is extremely relaxed. The interviewers were really impressed with his honesty. He tells them how little he does, because he doesn't have to. He isn't motivated and does the bare minimum it takes to get by.

The efficiency expert tells Peter they are going to fire his two hard working friends Michael and Samir, and are going to give him a raise. Peter can't believe it.

Peter asks Michael about the idea he had about stealing the fractional pennies from all of the company transactions (idea from Superman 3). Peter lets the guys know they are going to be let go, so they agree to implement their plan. Something goes wrong and they make over $300,000 in the first week. Just when it looks like they are going to jail, Milton burns the place down.

I just don't think Leonard gets it. There are many, many people who are unhappy and frustrated with their job. We don't all get paid to watch movies and then write about them. I think most people would like to take a bat to a copy machine with gangster rap playing in the background.