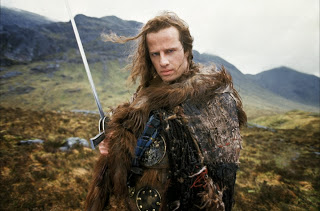 Leonard says in his review : "Interesting notion made silly and boring. Connery, at least, shows some style in a smallish role as Lambert's survival tutor. Former rock video director Mulcahy's relentless showy camera moves may have you reaching for the Dramamine."

I have to admit that the plot and narrative structure are all over the place. The movie jumps back to the 16th century Scottish Highlands where clan Macleod is battling with clan Fraser and then back to the present day where Connor MacLeod (Christopher Lambert) is fighting other immortals because "There can be only one".

When Connor survives a mortal wound on the Highland battlefields his clans men chase him off as a witch. MacLeod later meets another immortal, Ramirez (Sean Connery), who explains to him that he is an immortal and that he must battle the other remaining immortals until there is only one left. He also tells him about one of the immortals, the Kurgan, who MacLeod had already met on the Highland battlefields and will meet again in modern times.

A sword and sorcery, science fiction, adventure drama that has plot holes as big as MacLeod's sword, but overall is a lot of fun to watch. The movie, with a soundtrack driven by Queen songs, has become a cult favorite and is a movie that should be seen.