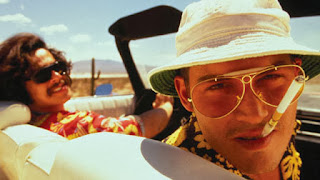 Leonard says in his review : "Excruciating adaption of the Hunter S. Thompson's 1971 book, which defined the counterculture of its day. The film, however, is simply one monotonous, painfully long drug trip - replete with close-ups of vomit and swooping camera movements at any and every opportunity."

The movie is listed as an Adventure and a Comedy by IMDB, but I have to admit is doesn't work as either of those for me. The drug induced antics of Duke and Dr Gonzo, were more disturbing than comedic to me. The narrative, what there was of it, didn't seem to qualify as any sort of adventure. The movie was just a series of scenes with two characters, on drugs, tryng to figure out what they were supposed to be doing.

The director Terry Gilliam said: "I want it to be seen as one of the great movies of all time, and one of the most hated movies of all time." Looking at the movie's reception, it seems that he was successful. The movie seems to be equally hated and loved. Leonard hated it, as did Roger Ebert, but Gene Siskel gave it a thumbs up and it has received a special edition release by the Criterion Collection and it also is listed in Empire Magazines Top 500 movies of All Time.

I think the movie is beautifully filmed with its "swooping camera movements" which help create the disturbing, uncomfortable, nightmarish world view of someone on drugs. I also thought Johnny Depp and Benicio Del Toro did a great job acting in this film.

For me, the movie works as a warning against drugs. After having seen it I have no desire to experience the drug induced adventures of Duke and Gonzo. I didn't find their "adventures" humorous, although I thought the writing and acting was very good.

But the bottom line is that 82% of the people on IMDB gave it a rating of 7 or higher and 90% of the people on Rotten Tomatoes liked it. I am sure that many of the people who like this movie like it for different reasons. Some may like it for its look at the counter-culture, other for its comedy, others for its dialogue and others for its warning about a dangerous lifestyle. But whatever the reason that people like it, there can be no doubt, given the numbers, that people do like it and others should be encouraged to see it so they too can decide for themselves.