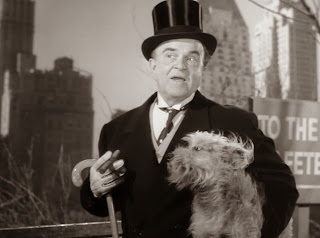 Leonard says in his review : "Overlong comedy about elegant N.Y.C. mansion taken over by thoughtful bum, who invites horde of friends and real owner in disguise to be his guests."

A wonderful little gem of a Christmas movie that I stumbled across by accident. Luckily, I used the IMDB rating to determine whether I should see it rather than Leonard's.

The movie starts off with a vagabond named Mac and his dog sneaking in to a 5th Avenue mansion owned by Michael O'Connor, the world's second richest man. Mac seems very comfortable and begins making himself at home. It seems that when O'Connor moves South for the winter, Mac moves in to his NYC house, and when O'Connor comes north for the summer, Mac moves in to his Virginia house.

Mac meets Jim Bullock, an out of work vet on a park bench, and invites him to spend the night at his house.

One thing leads to another and the house is soon filled with the O'Connor's daughter Trudy, two couples and a baby who are friends of Jim, Mr. O'Connor himself, and Mr. O'Connor's divorced wife. Mac runs the house, and most of the people have no idea who the others really are.

Like all good holiday movies this has a happy ending as Jim and Trudy fall in love, O'Connor reconciles with his ex-wife, Jim and his friends get good jobs, and Mr. O'Connor learns the true meaning of Christmas.

A wonderful movie, that is definitely not "overlong".