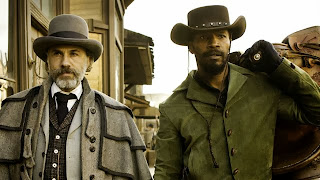 Leonard says in his review : "Another 'historical' revenge fantasy from Tarantino, in the mold of Inglourious Basterds. This has some outrageously entertaining (not to mention violent) sequences, and an overall exuberance, but never quite coheres and is also fatally overlong, diluting its impact and often-challenging ideas."

I think Django Unchained was a great movie on many levels. It was a wonderful homage to the exploitation movies that Tarantino grew up on and loved. It was an entertaining movie that was far from being "overlong". There wasn't one slow minute in the whole movie. How can it be "fatally overlong"? What would Leonard have cut out?

The movie is also very brave. It took 73 years for someone to finally answer the title card in 1939's Gone with the Wind.

"In his review of Gone with the Wind Leonards says: "If not the greatest movie ever made, certainly one of the greatest examples of storytelling on film, maintaining interest for nearly four hours. Margaret Mitchell's story is, in effect, a Civil War soap opera, focusing on vixenish Southern belle Scarlett O'Hara, brilliantly played by Leigh; she won Oscar, as did the picture, McDaniel, director Fleming, screenwriter Sidney Howard (posthumously), many others. Memorable music by Max Steiner in this one-of-a-kind film meticulously produced by David O. Selznick."

Leonard seems to buy in to the "land of Cavaliers and Cotton Fields called the Old South... Here in this pretty world Gallantry took its last bow... Here was the last ever to be seen of Knights and their Ladies Fair, of Master and of Slave... Look for it only in books, for it is no more than a dream remembered. A Civilization gone with the wind...".

Leonard says it was "one of the greatest examples of storytelling on film", and he is right there. It was storytelling, and it was all a lie. GWTW wants you to believe in this beautiful, almost mystical like civilization, where everything was beautiful, until the greedy, scheming Yankees came and destroyed it.

Tarantino had the courage to present those times as what they really were. It may have been a dream for the plantation owners, but it was a nightmare for the slaves, and Tarantino pulls no punches as he pushes aside the branches from the magnolia trees.

In his four star review Roger Ebert said: "Tarantino attacks at all levels. One of his most inspired scenes involves the Klan members bitching and moaning that they can't see through the eye-holes on the hoods over their heads. In everything but subject, that could be from a Looney Tunes movie. QT is grandiose and pragmatic, he plays freely with implausibility, he gets his customers inside the tent and then gives them a carny show they're hardly prepared for. He is a consummate filmmaker."

In his article in The Guardian,, John Patterson said:


"Can you name a single great mainstream American movie about slavery? I don't mean Birth Of A Nation or Gone With The Wind, both of which more or less endorse the Peculiar Institution; or Amistad or Beloved, which are adequate on the facts but no one's idea of great movies. I mean a great American movie possessed of an understanding of the full extent of slavery, its bottomless obscenity and violence.
No, I didn't think so. I'm not yet sure if Django Unchained, with Jamie Foxx as Nat Turner by way of Black Zorro, is actually a great American movie (though I haven't enjoyed a Tarantino movie this much since Jackie Brown), but it does not stint in its determination to show the full vileness of slavery, featuring to-the-death "Mandingo fights", female slaves as sexual chattel, the lash, the dogs, the brutish overseers, and a section of humanity ranked no higher than livestock.
It isn't very pretty. But it's appropriate that Quentin Tarantino, a self-proclaimed exploitation film-maker, has dared to look this subject right in the eye. Why? Because all the intelligent and provocative movies dealing with slavery – and with America's toxic race relations in general – come from the exploitation sector.
Hollywood didn't want to alienate southern ticket-buyers, so race was largely absent from studio movies until the 1970s.

This may not be one of the best movies ever made, but it might be. Time will tell. One thing is certain: it is not is a 2 1/2 star movie.