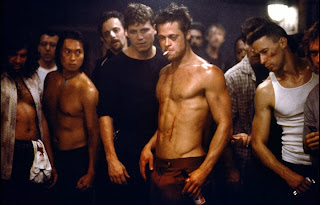 Leonard says in his review : "Draws you in with its intriguing story, black comedy and flamboyant visuals, then shifts tone, turns heavy-handed, and heads towards and alarmingly senseless resolution."

When I read through a film guide or look at ratings on IMDB or on the TV, I use the rating to help me determine if I will give the film a chance. You can't watch everything and there are enough movies out there with good ratings for me to see. If I see a movie that has 2 stars I pass, unless I have heard good things about it somewhere else.

Leonard gave Fight Club 2 stars. He is telling people it is not worth seeing, even though it is one of the most popular movies on IMDB with over 800,000 ratings. It is ranked #10 overall in their most popular movie list. 86% of the people rating it, gave it a rating of 8 or higher. That is incredible, but Leonard thinks people should pass on it?

I understand that if all the people who bought Leonard's book watched this movie, the ratings would go down. The movie appeals to a certain segment of the movie watching public, but for that segment, which is large, the movie is very, very popular.

The movie is about a person who is miserable, going through the motions in a life that he is stuck in, but can't escape from. The narrator played by Ed Norton meets Tyler Durden (Brad Pitt) who shows him how he can break down the walls around him, and begin to enjoy life.

This is one of those black comedies that walks the edge between tragedy and comedy. Some people will enjoy it as a comedic satire, others for its critique of consumerism and its philosophical take on modern life.

It may not be one of the great movies of all time (although it might be), but it is certainly not a two star movie.