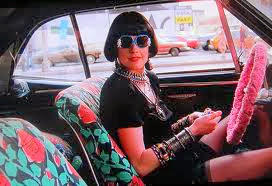 Leonard says in his review : "Straight-arrow businessman Daniels goes for a joyride with a flaky, sexy girl he chances to meet, and in the course of a couple of days she turns his life inside out. Many surprising twists and turns as this film veers from kooky comedy to violent melodrama, but end result isn't satisfying, especially with tacked-on happy ending."

I've always looked at this movie as a comic film-noir, which seems to be a contradiction in terms, but I think Jonathan Demme pulls it off. Accountant, and soon to be vice-president, Charles Driggs (Jeff Daniels) has a little quirk in his personality. Sometimes he doesn't pay for a check. When Lulu (Melanie Griffith) sees him in action, she decides to take him for a ride. Charles had a little flaw, had some bad luck when he ran in to the wrong woman, and his life would soon be turned upside down.

Charlie shows her pictures of her family and she drinks and drives and robs money from the cash register at a liquor store. They stop at a hotel room, and like in all noir movies you want to shout at the dopey guy to run away. She chains him to the bed and then calls his boss. The road trip to hell is on.

Charles goes to Lulu's high school reunion with her. Things were pretty funny at this point. When Charlie runs in to someone from the office at the reunion he stops having a good time. At this point he want to go back to his "boring safe life." But before you know it Charlie is out on the dance floor.

Then Ray Sinclair (Ray Liotta) shows up and the tone of the movie changes. In an instant we go from light and whimsical to dark and menacing. We find out that Charlie's wife had run off with the family dentist nine months ago. Soon Ray is holding up a store and knocking Charlie around. Ray has just got out of prison and he is Lulu's husband. Charlie escapes as soon as he can.

But Charlie can't leave Lulu and soon begins following them. There is "something wild" about Charlie. He could have left but he doesn't. He joins Ray and Lulu at a diner, and tells Ray that he wants Lulu. He then heads off with Lulu leaving Ray behind with police officers at the next table.

When Ray shows up at Charlie's house all vestiges of the comedy are gone. Cab a director do this in a movie? Can he just flip a switch and turn a comedy in to a thriller? Well, Jonatahn Demme did it here, and it worked for me.

Bret Easton Ellis, the author of Less Than Zero and American Psycho, recently tweeted, “The two key American films of the 1980s: Blue Velvet, Something Wild...” He also said : “I just showed it to someone who’s 24 and into film and they said, ‘Why did I miss this movie?’”. Ellis added that the film had had a huge influence on him.

I liked everything about this movie: the music, the style, Melanie Griffith, Jeff Daniels, Ray Liotta, the comedy, the drama and the mixing of genres. I don't think it was as popular with the audience because it was disturbing to watch a normal person's life fall apart. The dark comedy was probably just a little too dark for most people.

Another bad rating from Leonard.