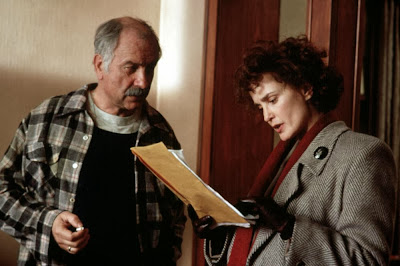 Leonard says in his review : What could have been a crackling political thriller becomes a high-gloss melodrama instead, plodding and far-fetched, ..."

This is a movie that I have seemed numerous times, and have always enjoyed. Director Costa-Gavras made a movie that worked for me as a mystery, a drama and a thriller.

The movie has Hungarian immigrant Mike Laszlo, who has been in the country fifty years, suddenly accused of war crimes when the Russians open up some of their files. Laszlo insists on his innocence and says it is the Communists in Hungary who are looking to defame him. He wants his daughter Ann Talbot (Jessica Lange) to defend him in court.

The movie is loosely based on the life of John Demjanjuk, a Cleveland Ford auto worker as well as on the experiences from writer Joe Eszterhas' own life. Eszterhas learned at age 45 that his father, Count Istvan Esterhazy, had concealed his wartime involvement in Hungary's Fascist and militantly Racist Arrow Cross Party. According to Eszterhas, his father, "organized book burnings and had cranked out the vilest anti-Semitic propaganda imaginable." After this discovery, Eszterhas severed all contact with his father, never reconciling before Istvan's death.

I think the hurt, and shock that Eszterhas must have felt, are brilliantly conveyed by Jessica Lange. She was nominated for an Oscar for Best Actress in a Leading Role for her performance.

Even though I've seen the movie quite a few times, I am always stunned by the scene at the end with the music box.

I also think the movie has some important things to say. Mike Laszlo was a good religious man, who loved his daughter and was well respected in his community. How could such a man be a monster? The movie shows that even "normal" people, put in to positions of power, may act in ways that are hard to believe.