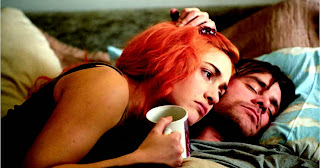 Leonard says in his review : "Ingenious, Oscar-winning screenplay by Charlie Kaufman is extremely well executed by director Gondry, though the film tends to cleverly dance around the roots of emotional and romantic pain rather than fully engage them."

Joel (Jim Carrey) and Clementine (Kate Winslet) were love, but after a break-up, Clementine doesn't even recognize Joel. Joel then finds out that Clementine has gone through a process that erased all traces of him from her mind. Joel decides that he will wipe Clemetine from his mind too. As Clementine is being erased from Joel's mind, we see flashbacks to their relationship. Joel remembers the days when he had been so happy and in his sub-conscious state realizes that he doesn't want her wiped out.

Joel struggles desperately in his unconscious state to stop the process, he doesn't want to forget Clementine. Memories from the past come flooding back, and Joel fights to remember Clementine. The past becomes undependable and reality becomes cloudy.


Why I respond so intensely to this material must involve my obsession with who we are and who we think we are. The secret of communicating with another person, I suspect, may be in communicating with who he thinks he is. Do that, and you can kid a great man and treat an insignificant one with deep respect. They'll credit you with insight.
The wisdom in "Eternal Sunshine" is how it illuminates the way memory interacts with love. We more readily recall pleasure than pain. From the hospital I remember laughing nurses and not sleepless nights. A drunk remembers the good times better than the hangovers. A failed political candidate remembers the applause. An unsuccessful romantic lover remembers the times when it worked.
What Joel and Clementine cling to are those perfect moments when lives seem blessed by heaven, and sunshine will fall upon it forever. I hope those are the moments some of those patients are frozen in. They seem at peace.


The movie won the Academy Award for Best Original Screenplay, and Kate Winslet was nominated for Best Actress in a Leading Role. It is on dozens of lists including the Writers Guild of America ranking it #24 on its list of 101 Greatest Screenplays, Entertainment Weekly's Best of the Decade, Slant magazines best movies of the 2000's, and Empire Magazine Greatest Movies of All Time.

It's a hard movie to categorize. It is drama, science fiction, romance, and comedy. It is a disturbing, challenging and it is a wonderful movie.