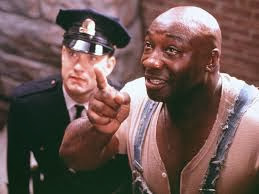 Leonard says in his review : "Well-made film has powerful moments, but their needlessly stretched over three hours... and the central conceit isn't easy to buy."

Roger Ebert didn't think the movie was too long. In his review he said:


The movie is a shade over three hours long. I appreciated the extra time, which allows us to feel the passage of prison months and years. Stephen King, sometimes dismissed as merely a best-seller, has in his best novels some of the power of Dickens, who created worlds that enveloped us and populated them with colorful, peculiar, sharply seen characters. King in his strongest work is a storyteller likely to survive as Dickens has, despite the sniffs of the litcrit establishment.
By taking the extra time, Darabont has made King's "The Green Mile" into a story which develops and unfolds, which has detail and space. The movie would have been much diminished at two hours--it would have been a series of episodes without context. As Darabont directs it, it tells a story with beginning, middle, end, vivid characters, humor, outrage and emotional release. Dickensian.

It's funny how two movie critics can see the same movie and one think its length is a strength and the other a weakness. I, like Roger, also thought the length was a strength. For me the movie never dragged for a minute.

If you asked me if I thought I would like a supernatural drams about a mouse, a magic healing prisoner, some compassionate guards, a sadistic guard and some prisoners being burned to death, I would have said no. This is not the kind of movie I usually go for, but it was just so well done.

A wonderful movie that should be seen by all who can then make up their own minds about this "long" movie. I'd give it 3 stars just for the scene of John Coffey watching Fred and Ginger in Top Hat and saying "Why, they's angels. Angels, just like up in heaven." How right he was.