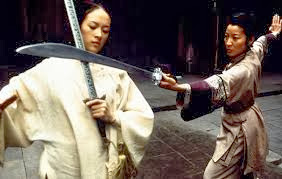 Leonard says in his review : "Beautifully filmed, with spectacular gravity-defying fight sequences ... but the characters and the (very protracted story) are never as compelling as one would like."

When you look at the numbers on IMDb and RT the line "but the characters and the (very protracted story) are never as compelling as one would like" doesn't really seem to make sense. They might not have been as compelling as Leonard would have liked, but everyone else really seems to have loved it.

Martial arts master Li Mu Bai (Chow Yun-Fat) wants to retire and enter a life of meditation and give up his warrior ways. His master had been killed by Jade Fox, and he is trying to overcome his feelings feelings of guilt over not having revenged him. He gives his famous sword, Green Destiny, to his friend Yu Shu Lien to give to Sir Te. Yu and Li won't say it out loud, but they know, as does everyone else that they are in love.

While Yu is delivering the sword it is stolen by a masked thief. Yu pursues and we have some high flying action. we later find out that the thief is Jen, who is aligned with the Jade Fox. It looks like Yu might be in trouble, but Li comes out of retirement to help. Before he leaves behind the martial world, he has one last thing he needs to do - kill the Jade Fox.


"Ang Lee's Crouching Tiger, Hidden Dragon is the most exhilarating martial arts movie I have seen. It stirred even the hardened audience at the 8:30 a.m. press screening at Cannes last May. There is a sequence near the beginning of the film involving a chase over rooftops, and as the characters run up the sides of walls and leap impossibly from one house to another, the critics applauded, something they rarely do during a film, and I think they were relating to the sheer physical grace of the scene. It is done so lightly, quickly, easily."
He went on to say: "There are those, I know, who will never go to a martial arts movie, just as some people hate Westerns; Jack Warner once told his producers, 'Don't make me any more movies where the people write with feathers.' But like all ambitious movies, Crouching Tiger, Hidden Dragon transcends its origins and becomes one of a kind. It's glorious, unashamed escapism and surprisingly touching at the same time. And they're really up there in those trees."

Fairy Tale, martial arts, drama, love story - it all worked for me. A really good movie from a great director. I never mind when good movies are long, just the bad ones.