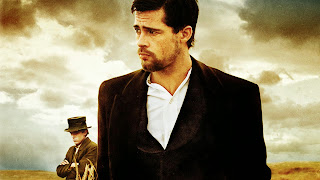 Rotten Tomatoes Synopsis: "On the strength of its two lead performances Assassination is an expertly crafted period piece, and an insightful look at one of the enduring figures of American lore."

Leonard says in his review : "Well acted, beautifully made, but crippled by over length - which is not matched by commensurate character development or the intended thematic insight into the nature (and effects) of myth and celebrity."

This was a beautifully filmed movie and was nominated for an Oscar for Best Achievement in Cinematography. The movie was also very well acted with Sam Rockwell, Jeremy Renner, Sam Shepard and Casy Affleck (who was nominated for an Ocace fo Best Performance by an Actor in a Supporting Role). But it is Brad Pitt as Jesse James who dominates the screen. When he walks in to a room he brings a sense of menace with him. It is uncomfortable to watch him; his psychotic behavior seems to jump out of the screen.

And the hero worship of Bob Ford (Casey Affleck) is also beautifully portrayed. Bob loves Jesse, but he also loves the idea of being someone important.

The movie moves slowly, and it revels in its slowness. The music is slow and the camera shots are large. The language is flowery. A narrator will pop in to the story and say things like:


And so it went, Jesse was increasingly cavalier. Merry, moody, fey, unpredictable. He camouflaged his depressions and derangements with masquerades of extreme cordiality, courtesy, and goodwill towards others. But Even as he jested or tickled his boy in the ribs, Jesse would look over at Bob with melancholy eyes as if the two were meshed in an intimate communication. Bob was certain that the man had unriddled him; had seen through his reasons for coming along; that Jesse could forecast each of Bob's possible moves and inclinations and was only acting the innocent in order to lull Bob into a stupid tranquility and miscalculation.

But to me the narrator wasn't a distraction. It was interesting to hear what someone else thought about what was going on.

Bob Ford comes to realize that Jesse is just a human being. He isn't the demi-god he grew up thinking he was. Bob begins to turn on Jesse and plans Jesse's demise. Jesse, takes his guns off, which he never does and turns his back on Bob. It seems the Jesse has had enough of this world and wants Bob to finish him off, and Bob does - shooting him in the back of the head.

Bob is excited by what he has done and rushes off a telegram to the governor. But Bob's fame is not all that he thought it would be. He acts on stage recreating his famous assassination, but he is not the admired person he thought he would be. He is famous, but the audiences barely clap for him. And then the audiences start screaming "murderer, coward, cur" during his performance.

The movie was long, it was slow and it was different. It aimed high, at greatness, and even if it didn't quite hit its mark, it was still very good and well worth seeing.