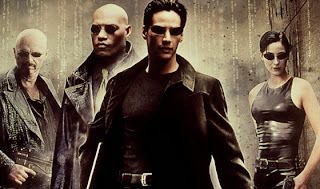 Leonard says in his review : "Cutting-edge visuals and production design compete with an overlong script, written by the directors, that's got a high MJQ (Mumbo-Jumbo Quotient) and a tendency to keep changing its own complicated rules."

To say that it is overlong is really kind of ridiculous. The plot and the ideas behind it are pretty complicated and if the movie was shortened it would have been much harder to understand. It is the number #19 movie on IMDb and has been rated by over 800,000 viewers, so I guess the length and the MJQ didn't bother them too much.

When The Guardian listed the Top Science Fiction movies of all time, The Matrix came in number 10 and IGN had it as number 7 on its list. The Matrix placed 66th in the American Film Institute's "100 Years...100 Thrills" list. Entertainment Weekly called The Matrix the best science-fiction piece of media for the past 25 years. It was ranked 39th on Empire's reader-, actor- and critic-voted list of "The 500 Greatest Movies of All Time". The film was also added to the National Film Registry for preservation.

By cherrypicking as many key ingredients from action films as they could (the us-against-the-machines mentality from The Terminator, the wire work from Crouching Tiger, Hidden Dragon and the star from Johnny Mnemonic), and shooting it through with a timely dose of pre-millennial unease, the directors single-handedly managed to reinvigorate an entire genre. The sight of Arnold Schwarzenegger lunkheadedly charging through armies of ineffectual goons started to look embarrassingly tired. The Matrix marks the point where fans demanded more – they wanted to see themselves on screen. And that's why the casting of Keanu Reeves was a masterstroke. He might be pretty, but he's no one-man army. Plus: Neo is totally an anagram of "One". Woah

IGN review
"What movie is this generation's Star Wars?" It's a question that gets asked an awful lot. Many assumed Star Wars: Episode I would be this generation's Star Wars, but another, entirely different sort of science fiction movie managed to steal George Lucas' thunder in 1999. The Matrix captured the imaginations of sci-fi lovers everywhere and offered them a type of film they hadn't seen before.

The Matrix is brimming with all sorts of philosophical questions. What is reality? Is the world around us real or an illusion? Whose kung fu is strongest? The film strove to be more intelligent and thoughtful than the average action movie, yet it was never afraid to put aside the musing for some well-choreographed butt-kicking. The Matrix's slow motion combat ballet inspired legions of imitators. None have lived up to the original, not even the two Matrix sequels.

The franchise may have peaked early on, but it was enough to deliver cinematic gold to starving sci-fi lovers.


From its great opening with the voices speaking over the graphic of the lime green numbers to the great slow motion battle scenes, I loved it all. There is no doubt, that it had a high MJQ as Leonard calls it, but it was original, intelligent, innovative and I think it did a great job of making sense of the Mumbo Jumbo.

When Neo first sees the line "Th Matrix has you..." on his computer screen, the mystery begins for him and for us. Neo, Morpheus, Trinity and Agent Smith are all great characters. There are so many interesting ideas and themes. A distopian world where reality is hidden from the people could be about Nazi Germany or Communist Russia. The search for the "One" could represent the search for the Christ who would reveal the truth to the world. If you had the choice to know the truth and the pain associated with it or remain ignorant and happy, what would you choose?

This is a movie that is really popular, has a beautiful look to it, and deserves a much higher rating than the 2 1/2 stars that Leonard gave it.