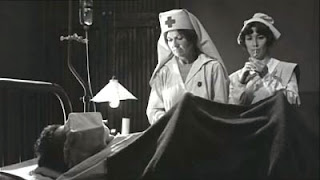 Leonard says in his review : "Morbid film version of Trumbo's novel about WW1 basket case has moving opening and climax, but everything in the middle is either talky, pretentious or amateurish."

Dalton Trumbo directed his only movie based on his award winning book. Tomothy Bottoms plays the soldier in World War 1 who becomes conscious in a veterns hospital and is trying to figure out what is going on. We hear his thoughts as he comes to discover the truth about his body. He has no arms or legs and only part of his face. The only sense he has is touch. We come to know him as we see flashbacks of his earlier life.

The young man wonders why the doctors would keep him alive. As the movie goes on the young man discovers more and more about his body. No eyes or mouth. He begins to get desperate as he realizes the nightmare he is living. He counts off thetime and a year goes by, and he comes to think of himself as a freak in a circus.

He tells the officers that he wants to be let out, so people can see him. If they don't let him out then they should kill him. The army officer closes the shutters. No one is to see him.

Dalton Trumbo's Johnny Got His Gun smelled like that kind of anti-war film. It came out of the Cannes Film Festival with three awards and a slightly pious aroma, as if it had been made for joyless Student Peace Union types of thirty-five years ago. But it isn't like that at all. Trumbo has taken the most difficult sort of material -- the story of a soldier who lost his arms, his legs, and most of his face in a World War I shell burst -- and handled it, strange to say, in a way that's not so much anti-war as pro-life. Perhaps that's why I admire it.

Not a happy movie, but no movie about war should be a happy movie. It is talky, but I found the dialogue to be really interesting. I also didn't find it as pretentious at all. There is nothing wrong about talking about "big topics" in film, and there is probably no topic bigger than war. The movie did have amateurish production values, but for me it worked because it came off as being honest, and certainly not pretentious.

The movie ends with the man chanting SOS - Help Me. It also has a card that says:

(It is sweet and fitting to die for your country." - Horace)