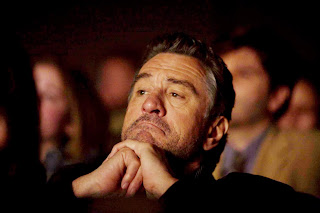 Rotten Tomatoes Consensus : What Just Happened has some inspired comic moments, but this inside-baseball take on Hollywood lacks satirical bite.

Leonard says in his review : "Hotshot producer De Niro attempts to maintain appearances while juggling demands of studio heads, wobbly investors, ex - (or soon to be ex) wives and childish, tantrum causing stars in this darkly funny tale that answers the question, "What does a producer do?"

It's hard to walk the fine line between drama and comedy and make a good black comedy. When it works it is great, but when it doesn't it is a mess. To me this movie missed. It wasn't funny, and I didn't care about the characters.

In his 2 star review Roger Ebert said: "This isn't a Hollywood satire, it's a sitcom. The flywheels of the plot machine keep it churning around, but it chugs off onto the back lot and doesn't hit anybody in management."

I did get a feel for what a producer does by watching this movie, but I just wished it could have been better.

If you want to watch a movie that is much better watch Robert Altman's The Player. It is everything this movie wanted to be. The only crazy thing is that Leonard gave that great movie and What Just Happened the same rating. It's hard to believe we saw the same movies.