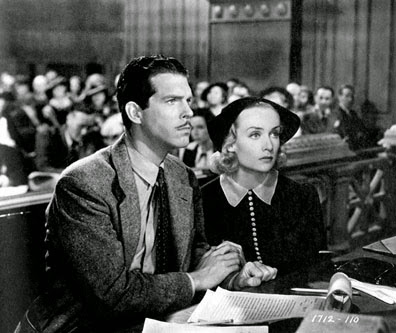 Rotten Tomatoes Synopsis : Carole Lombard stars as Helen Bartlett, a compulsive liar who always tips the audience to an oncoming whopper by sticking her tongue in her cheek. Helen is married to a Kenneth Bartlett, a scrupulously honest lawyer whose integrity has always held him back professionally. Hoping to help Kenneth get ahead, Helen confesses to a murder she obviously didn't commit, confident that he'll get her off and make his reputation. But things don't go exactly as planned, thanks largely to a mysterious eccentric named Charley (John Barrymore), who assures the heroine over and over that she'll "fry." Once considered a prime example of screwball comedy, True Confession is now regarded by film buffs as one of Carole Lombard's worst pictures: it wasn't much better when remade by Betty Hutton in 1946 as Cross My Heart. ~ Hal Erickson, Rovi

Leonard says in his review : "Alarmingly unfunny 'comedy' about pathological liar Lombard and the trouble she causes for herself and her good-natured husband MacMurray when she confesses to a murder she didn't commit."

Hal Erickson doesn't like this movie and it seems that Leonard likes it even less, but I thought it was great. It wasn't as good as Twentieth century, My Man Godfrey, Nothing Sacred or To Be or Not to Be, but then again what is? I can watch just about anything with Carole Lombard or John Barrymore, and this movie had both of them and they were good, and so was the movie.

In the movie Helen Bartlett (Lombard) is the wife of the honest lawyer Ken (Fred MacMurray). Ken is so honest he won't take on a client who is guilty. Helen wants to be a writer, but goes out and gets a job for fifty dollars a week, without her husband knowing about it. Her employer, Otto Krayler, ends up trying to put some moves on her, so she punches him and runs away. She later goes back with her girlfriend to get her coat, and is arrested at the crime scene with the body of her boss.

Helen has trouble telling the truth and sticks her tongue in her cheek, before she tells a lie. In this situation she decides that if she confesses to the crime, her husband can become famous, and kick start his career. Helen told Ken that she killed In the courtroom audience there is a character, an amateur criminologist, named Charley Jasper (Barrymore).

Under examination Helen looks foolish because she can't do shorthand or type, yet she took a job as a secretary. Charley visits Helen in jail and tells her she will fry. Helen and Ken later act out the scene where Helen supposedly killed Otto, who was trying to "buy" her honor.

Ken pitches to the jury that women have the right to work without being harassed. The prosecutor says she is guilty of first degree murder. The jury has some trouble, but comes back with a not guilty verdict.

Ken gets more work than he can take care of, and Helen begins to write her book. Helen is thrilled but Ken is not too happy. He can't be happy knowing they are profiting off someone's death. Helen then tries to convince ken that she really didn't kill Krayler, but Ken says that if she lied about something like that it would be worse than murder.

Charlie Jasper stops over a visits the lake house. He tells Helen and her girlfriend Daisey, that he killed Otto Krayler. Charlie wants a bribe for keeping quiet. He says that Helen is a perjurer who will go to jail. When Ken comes down Helen tells Ken the truth. Ken threatens to call the police about the extortion and Charlie backs down. He admits that it was his brother-in-law who killed Krayler.

Ken walks out and Helen sticks her tongue in her cheek and shouts "If it's a boy I'll name it after you" and Ken comes running back. He thinks she may be lying but comes back anyways.

A really good movie with a great cast.