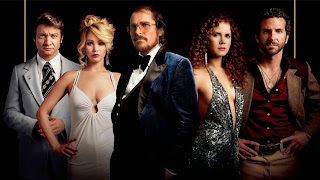 Rotten Tomatoes Rating : 93% with critics and 75% with audience

Leonard says in his review : "American Hustle is overlong, but it’s never dull. It has many great moments, including a reference to Duke Ellington that brought a big smile to my face. But in spite of its many assets, the picture gave me no one to root for, so at the end, I felt nothing."

Great acting with a really good story adds up to a very good movie. Much better than the 2 1/2 stars Leonard gave it.