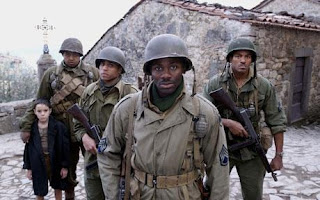 RT Critics Consensus:  Miracle at St. Anna is a well-intentioned but overlong, disjointed affair that hits few of the right notes.

In his review Leonard says: " The film is really a series of vignettes, showing the moral crises faced by soldiers and civilians on both sides of the war. There are scenes of heartbreak and horror as well as lighter moments, and the performances by Miller, Derek Luke, Michael Ealy and Laz Alonso are outstanding. “Miracle at St. Anna” illuminates a particular aspect of World War Two that Hollywood hasn’t explored until now."

I love historical movies. Malcolm X, Gettysburg, Lincoln, Amistad, Black Robe, Glory, Good Luck, and Good Night, an All the President's Men are some of my favorites.

I was sure that this was a movie that would join that list. Spike Lee and a really interesting topic: it seemed like it couldn't miss. But it did.

Inside of this 160 minute film which seemed to go on forever, there is probably a really good 90 minute movie. The first hour was tough to get through and by the time a more interesting second half appears, I was already disappointed.

Some times a director falls so love with the material that he doesn't want to cut anything out of the film. I think that is what happened here. Aimed for the fences, but hit a pop fly.

It's too bad. This could and should have been much better.