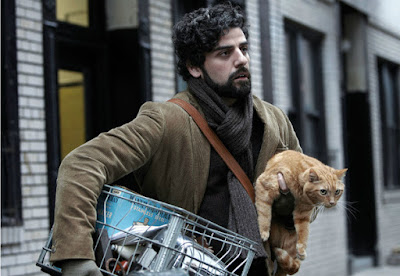 In his review Leonard says: "But while this chamber piece is well acted and meticulously crafted, down to the tiniest detail, it’s not a film one can cozy up to. That’s not the Coens’ intention, of course, but it almost seems as if they’re making an effort to push the audience away—like their oddly-named protagonist. That’s why even after several months I hold certain moments dear but can’t muster any real affection for the film as a whole. I admire and respect what Joel and Ethan Coen have created. They’ve given us a unique movie going experience, and that’s no small achievement. It’s just difficult to recommend to anyone but a Coen camp follower.."

Leonard doesn't like the quirky Coen brothers humor. He gave 2 1/2 stars to The Big Lebowski, A Serious Man, and Miller's Crossing. He's basically saying that people shouldn't bother to see these movies. He thinks only a small set of Coen Brother enthusiasts will like them. Movie Crazy is right.

I can understand making a mistake on a particular review that you have to write the next day. Sometimes you just aren't in the mood, or can't concentrate for some reason. It happens.

But there is no excuse to miss on three great movies, by the two of the best directors working today when you have a group to bounce things off , and you have a great deal of time to prepare your final rating.

Inside Llewyn Davis was nominated for two Academy Awards, was on the AFI list for top 10 movies of the year, Top ten List for National Board of review, won at Cannes, and won Best Picture, Best Director, Best Actor and Best Cinematography from the National Society of Film Critics.

Inside Llewyn Davis was a great movie with great music. Another really good movie from the Coen Brothers.