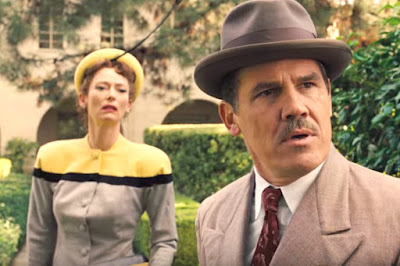 In his review Leonard says: "The minor doodlings of Joel and Ethan Coen can be more interesting and provocative than other filmmakers’ major efforts… but even so, Hail, Caesar! promises more than it delivers. Barton Fink may have run off the rails at a certain point but it captured more of Old Hollywood and its ways than this stylish piece of fluff.
Film buffs will enjoy taking a time-trip to the past, brought to life with such a keen eye for detail, but I wish this screenplay were more cohesive.
My consolation: there will be another Coen Brothers movie coming down the road sometime soon."

I'll be the first to admit the main purpose of the Movie Guide should be to guide people towards watching good movies, And people just don't seem to like this movie. So Leonard's lukewarm review is probably justified in this case.

But I just think the movie is so good I had to include it.

The movie is more style than substance. The main plot that has George Clooney being kidnapped by Communists for ransom just very loosely holds the movie together.

The movie has scenes from a Ben-Hur like movie (with George Clooney), an Esther Williams like water musical (with Scarlett Johansson) , a Gene Kelly-like musical number (with Channing Tatum), a scene with a emigre director struggling with a miscast actor (with Ralph Fiennes), a Gene Autry-like musical, and a Carmen Miranda-like musical number.

There are also multiple scenes with the Hollywood Ten screenwriters discussing their part in the Communist plot, Tilda Swinton as Hedda Hopper and Louella Parsons. But it really Josh Brolin, who plays Hollywood fixer Eddie Mannix who holds the movie together. Mannix moves from scene to scene, and set to set, as he tries to solve any publicity problems that come up for the stable of Hollywood stars he oversees.

If you  look at it as a whole, the movie looks like a failure. But if you look at the pieces and at the style you will see a wonderful movie. It is one of those movies that you can turn on to any part of, and immediately become engaged in.

A really good movie that I think will get better with each viewing.