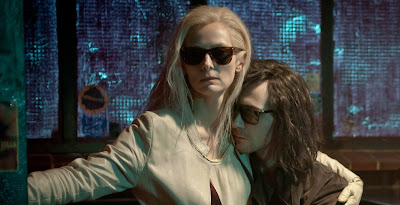 In his review Leonard says: "But the film’s languorous approach literally tired me out. Even defenders of the picture will have to admit it doesn’t have much story to tell.
It may seek to address the notion of eternal love but it is also about ennui, and I found myself succumbing to a series of yawns.
I’m tempted to pun again and call the movie bloodless. In
fact, I will."


The BBC just came out with the Top 100 films of the 21st century so far and Jim Jarmusch's vampire movie was on it.

Leonard felt the movie was slow and boring, but I thought it was really good. I  wasn't bored for a second. What would it be like to be almost immortal and live hundreds of years? How would vampires be able to live in modern society?

The movie was beautifully filmed and the acting was great. Tilda Swinton and John Hurt (as Christopher Marlowe) were particularly good.

The movie worked as a drama, a comedy and as a horror film. That's not easy to do but Jim Jarmusch is a genius.