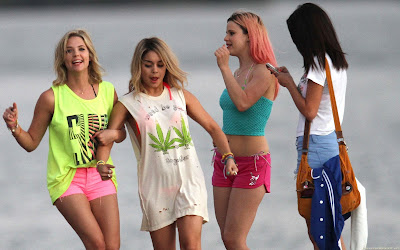 In his review Leonard says: "Sold to moviegoers as 'trashy fun' with a titillating premise and four nubile stars in bikinis .. but it's disgusting, aimless and pointless."

The BBC just came out with the Top 100 films of the 21st century so far and Spring Breakers was on it!

This  was, like the film script director Harmony Korine wrote for Kids, very disturbing. But I think that was the point of it. I don't think it was being exploitative. I think it was exploring the realities of a life style that American teen culture points to as an ideal.

Four girls go down to spring break from college. They fall in with a drug dealer named Alien. Faith (Selena Gomes) wants no part of this and heads home, leaving the other three.

The drug dealer Alien (James Fanco) says: : "I got Scarface. On repeat. Scarface on repeat.. Constant, y'all!" He also has money, Calvin Kleins' Escape, machine guns and everything else he wants.

In his 3 1/2 star review Richard Roeper says :"Spring Breakers challenges us to think about the hedonistic hell that of that annual ritual, as it segues from party film to insane crime story. It's self-indulgent, it's funny, it's dark, and it's always provocative."

The movie needs to be seen, just for James Franco's performance if for nothing else. But I think there is much more here.

Rather than being exploitative, I think it is a cautionary tale. The gangster lifestyle loses it's glamour quickly. I don't think that anyone who sees this movie would be anxious to join in it.

It may not be one of the best movies of the 21st century, but it is bold, provocative and well worth seeing.