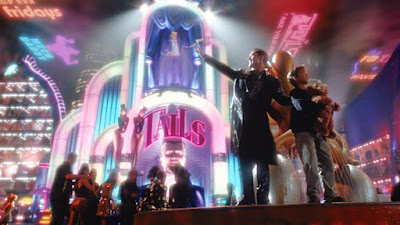 RT Critics Consensus:  "A curious, not always seamless, amalgamation of Kubrick's chilly bleakness and Spielberg's warm-hearted optimism, A.I. is, in a word, fascinating."

In his review Leonard says: "Intriguing story draws us in, thanks in part to Osment's exceptional performance, but it takes several wrong turns; ultimately, it just doesn't work."


The treatment for this movie was by Stanley Kubrick. He had been in conversations with Steven Spielberg about the possibility of him doing the movie. When Kubrick died Kubrick decided to do the movie.

The movie is looked at as a combination of the two famous director's different outlooks, and some people (including Leonard) thinks the final product just didn't work.

But I think the movie turned out really well. When it was made in 2001, A.I. was still in a pretty early stage. But now in 2017, we are getting ready for self driving cars and have computers talking to us and giving us advice in the car and in the kitchen.

The movie is beautifully filmed, and I think the story is really good. The ending seemed a little out of place, but I don't think it seriously flaws a really good movie.