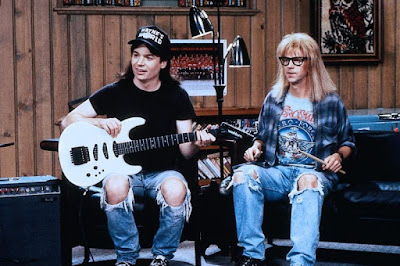 Rotten Tomatoes Critics Consensus :   An oddball comedy that revels in its silliness and memorable catch phrases, Wayne's World is also fondly regarded because of its endearing characters.

In his review Leonard says: "Myles and Carvey are funny as the self-styled party dudes with their own cable TV show, and leading lady Carrere certainly is a 'babe', but the story has too many slow spots and muffed jokes. Even casting Lowe as a slimeball doesn't pay off - because he's still so dull. Our advice : party elsewhere."


Goofy humor is something I don't normally go for, and this really is just an extended SNL skit, but somehow it works for me.

And one of the opening scenes in the mirth mobile, has the great Bohemian Rhapsody scene, which really is iconic.


I walked into "Wayne's World" expecting a lot of dumb, vulgar comedy, and I got plenty, but I also found what I didn't expect: a genuinely amusing, sometimes even intelligent, undercurrent. Like the "Bill & Ted" movies, this one works on its intended level and then sneaks in excursions to some other levels, too.

Roger went on to say:


One quality that grew on me during the film was Myers' conversations with the camera. In a sense, this whole movie is a cable access documentary on his life, and particularly on his great and helpless crush on Tia Carrere. The Dana Carvey character doesn't wear as well; the fact that his personality has a severely limited range of notes doesn't prevent him from play them over and over.

The guys never stop talking to the audience, the cameraman and anyone else the boys can see. The movie is just one skit after another, very, very loosely tied together. Some of the scenes don't work, but taken all together they do.

Stacy: Well, don't you want to open your present?
Wayne Campbell: If it's a severed head, I'm going to be very upset.
Stacy: Open it.
Wayne Campbell: What is it?
Stacy: It's a gun rack.
Wayne Campbell: A gun rack... a gun rack. I don't even own a gun, let alone many guns that would necessitate an entire rack. What am I gonna do with a gun rack?
Stacy: You don't like it? Fine. You know Wayne, if you're not careful, you're going to lose me.
Wayne Campbell: I lost you two months ago. Are you mental? We broke up. Get the net!

Stacy: Happy anniversary, Wayne.
Wayne Campbell: Stacy, we broke up two months ago.
Stacy: Well, that doesn't mean we can't still go out, does it?
Wayne Campbell: Well, it does actually, that's what breaking up is.


Tia Carrere and Rob Lowe do their best to act badly, and they do it very well. This is not a movie  that should work, but it does.

In 2000, readers of Total Film magazine voted Wayne's World the 41st-greatest comedy film of all time.