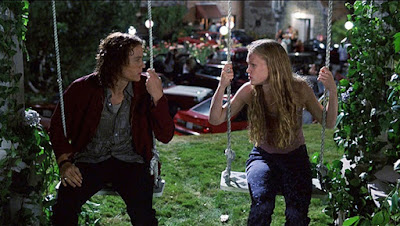 In his review Leonard says: "Cute teen-comedy takeoff on Taming of the Shrew set at Padua High."

I don't think I have ever posted something as being a bad or wrong review when I only disagreed by 1/2 a star with the reviewer, but in this case I think it is important.

I really only think you should see movies that are three stars or higher, just because there are so many of them out there. Why waste time on lower rated ones (unless there is a certain genre you particularly like).

That being said, 10 Things I Hate About You is a movie that I think should be seen. One reason is because we lost Heath Ledger so early and he didn't leave us too many movies to see him in.

It was also a pretty good adaption of Shakespeare or as Roger Ebert said:


10 Things I Hate About You'' is inspired, in a sortuva kinduva way, by Shakespeare's "The Taming of the Shrew,'' in the same sense that "Starship Troopers'' was inspired by "Titus Andronicus.'' It doesn't remake Shakespeare so much as evoke him as a talisman, by setting its story at Padua High School, naming its characters Stratford and Verona, making one of the heroines a shrew, etc. There is even a scene where the shrew is assigned to rewrite a Shakespeare sonnet.

I think the movie could have been better. It's writing was shaky in parts turning to crude humor to appeal to the teenage set, but overall I think it is well worth seeing.

I really liked the stadium scene with Heath Ledger singing "I Love You Baby"  and Julia Stiles speech at the end :


Both scenes were pretty iconic in their own way.

Not the best teen comedy I've seen, but for what it is, I think it is well worth seeing.