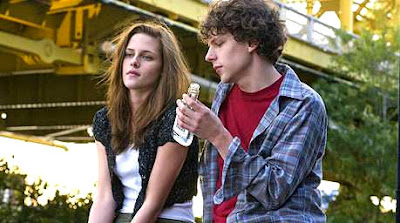 Rotten Tomatoes Critics Consensus :   Full of humor and nostalgia, Adventureland is a sweet, insightful coming-of-age comedy that will resonate with teens and adults alike.

I don't know why the critics liked this movie so much more then the audience but I am guessing it might be because they saw the potential in the stars. Jesse Eisenberg was just beginning his career and was really good in this coming of age movie. Ryan Reynolds had been in a quite a movies but he was no where near the star he is now.  Kristen Stewart had starred in Twilight as Bella Swan, but I think she was probably more dismissed as an actress because of her role in this series.

All of those actors as emerged as major stars, and Kristen Stewart may become a super star. Does that make the movie better retroactively?  I think it does. It may not be fair to criticize Leonard's original review because of it, but I think that's how people watch movies. If there are stars that you enjoy watching there is added intrinsic value in the film. I know there are many movies I really enjoy that I would think mediocre if a particular actor was removed.

In his review Roger Ebert said :


As the summer lurches between deadly boredom and sudden emergencies (someone wins a Big Ass Panda), James and Em grow closer. This is absorbing because they reveal themselves as smarter than anyone else realizes. From his earlier work, I expected to like Eisenberg. What surprised me was how much I admired Kristen Stewart, who in Twilight, was playing below her grade level. Here is an actress ready to do important things. Together, and with the others, they make Adventureland more real and more touching than it may sound.


Another reason I think the movie got lower reviews from the audience is because it followed director Greg Mottola's Superbad. I think the audience was expecting and hoping for the same kind of goofy humor and what they got was a much more serious and darker comedy drama.

There are quite a few coming of age movies out there, and this movie does cover familiar territory, but I think it covers it very well.