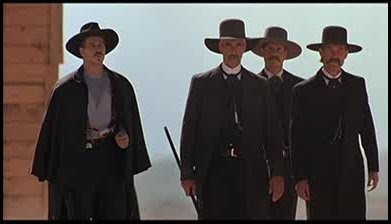 
In his review Leonard says: "Wyatt Earp (Russell) attempts to leave his violent days behind him, moving to Tombstone with his two brothers... but the murderous gang called The Cowboys (whose members include the Clantons) dictates otherwise. Not-bad Western saga, with a forceful performance by Russell, and a likably eccentric one by Kilmer as the tubercular Doc Holliday. Delany, however, is positively goofy as Wyatt's love interest, and the story goes on way past the O. K. Corral shootout, with a series of redundant gun battles and showdowns. The real Earp's fifth cousin, Wyatt Earp, plays Billy Claiborne."


I love Westerns. The Searchers, The Wild Bunch, My Darling Clementine, Red River, Unforgiven... all great movies. I don't think Tombstone was on that level, but it was still really good and well worth seeing. I think it is one of the better Westerns made outside of the classic era.

It had a great cast with Kurt Russell, Sam Elliot and Bill Paxton as the Earp brothers, but it is Val Kimer who dominates the screen with his bizarre portrayal of Doc Holliday.  When Harry Carey Jr., playing the Marshal, is gunned down in cold blood, the Earps take on the Cowboy gang at the OK Corral.

Billy Clanton: Why, it's the drunk piano player. You're so drunk, you can't hit nothin'. In fact, you're probably seeing double.
[Billy Clanton draws a knife]

Doc Holliday:  I have two guns, one for each of ya.

I wasn't wild about the side story of Wyatt's love affair with the travelling showgirl, but I stil lthought the movie was really good.

7.8 on Imdb and 94% with the audience on Rotten Tomatoes makes it sound much better than the 2 1/2 stars Leonard gave it.