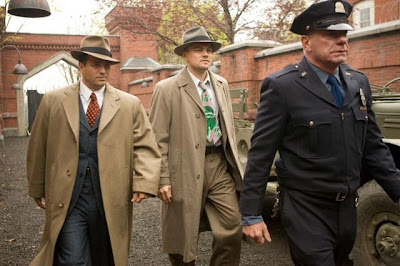 Rotten Tomato Consensus: "It may not rank with Scorsese's best work, but Shutter Island's gleefully unapologetic genre thrills represent the director at his most unrestrained."

Leonard says in his review: "With Scorsese behind the lens, it;s hard to dismiss - but it doesn't rate much as entertainment."

With a two star review Leonard is telling people not to see this movie. With so many movies with over two star ratings why would any one waste their time on a two star movie?

The problem with the movie is that is is by Scorsese, and he sets the bar so high, that this movie can be a disappointment to some. It's like with Kubrick, Eyes Wide Shut might be seen as a major disappointment for the man who made Dr. Strangelove, but it is still touched by genius and better then 95% of the movies that are out there.

I was really thrilled to see Scorsese's take on the noir world. He showed the cast Out of the Past to help acquaint them with the style and tone he hoped to capture with his movie. People have criticized Shutter Island for it's story line, but noir isn't about the story. If someone judged The Big Sleep by its storyline, it would never be seen, but it is a wonderful film noir. Scorsese's film is a wonderful homage to the film noirs he grew up on.

In his three and a half star review Roger Ebert says: "You may read reviews of Shutter Island complaining that the ending blindsides you. The uncertainty it causes prevents the film from feeling perfect on first viewing. I have a feeling it might improve on second. Some may believe it doesn't make sense. Or that, if it does, then the movie leading up to it doesn't. I asked myself: OK, then, how should it end? What would be more satisfactory? Why can't I be one of those critics who informs the director what he should have done instead?"

Roger likes it, the people on IMDB love it but Leonard's rating is telling people not to see it because "it doesn't rate much as entertainment." All I know is that I've seen it three times, was really entertained and I am really looking forward to seeing it again.