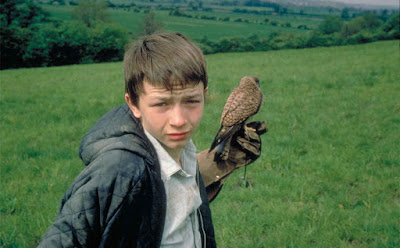 
In his review Leonard says: "Refreshing, unsentimental of a young working-class boy who finds relief from the dreariness of his life by looking after and training a falcon . "


Leonard liked the movie, but he only gave it 3 stars.

Ken Loach has made a bunch of really good movies including Ladybird Ladybird, My Name Is Joe, Sweet Sixteen, The Wind That Shakes the Barley, Looking for Eric and the recently released I, Daniel Blake but to me his best is Kes.

Kes had a documentary feel, as it looked at the lives of the English working class poor living to go out on Saturday night.

The Yorkshire accents makes the much of the dialog unintelligible, and it has to be watched with the subtitles on.But I think this adds to the movie as we look at a foreign culture.

Billy escapes his depressing environment by raising a kestrel and training it. The kestrel gives Billy a sense of purpose and also helps to define him as a person.


But “Kes” is Loach at his best. He shot it on a very low budget, on location, using most local nonprofessionals as his leads. His story is about a boy who’s caught in England’s class-biased educational system. He reaches school-leaving age and decides to leave, but doesn’t have anything else he much cares about. He’s the butt of jokes and hostility at home (where his older brother rules), and inarticulate with his contemporaries.

One day he finds a small kestrel hawk, and trains it to hunt. The bird becomes his avenue to a free and natural state - the state his soul needs, and that his home and school deny him. And then the system, alarmed or offended by his freedom, counterattacks. The film has a heartbreaking humanity.

The 2012 Sight and Sound poll had Kes as the 235th best movie ever made. It is unquestionably a 4 star movie.