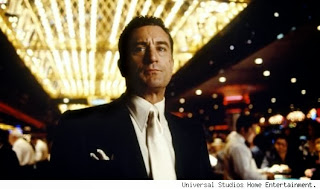 
Leonard says in his review : "Long, tedious tale of a numbers-obsessed gambler sent to Las Vegas by the mob to run a casino in the 1970s. Problem is, neither he nor his loose-cannon pal, who follows him, nor the hustler he decides to marry has any idea how to hold on to what they've got. Disappointing reteaming of Scorsese and writer Nichola Pileggi, who scored big with Goodfellas; this time, their story is overlong, repetitive, and aloof."

It is flawed, it is overlong, but it is still a really good movie with great acting. Robert De Niro, Joe Pesci, Sharon Stone, James Woods and the supporting cast were all really good. This is a movie worth watching just for the acting and style alone.

The story is reminiscent of Goodfellas with the gangsters making it to the top, and then come crashing down. This was not Goodfellas, but is was also not disappointing. An interesting look at organized crime and Vegas. It is brutal, depressing and disturbing, but it is also a realistic look at life in the fast lane.

To give the movie two stars, which in effect is telling people not to see it, is doing a big disservice to the movie watching public. Leonard's book should be pointing out what people who watch movies would enjoy, not what he personally prefers (particularly when he is so wrong).